Cranky just put the finishing touches on his set list for the 2017 season. This year may see nine new song, bringing the Cranky Hit List (CHL) total to 77 songs. Cranky is hedging on the actual number of nine songs making the cut, since, if past years are any indication, some of these new ones won’t see it past a few crappy attempts. As a matter of fact a few of these ‘new’ songs are ones that have been attempted in years past. They’ve been given a makeover and we shall see what we shall see, as they say. 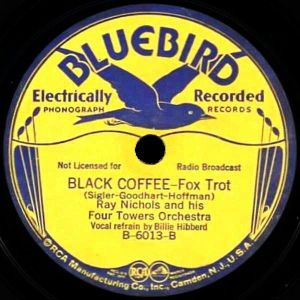 One song that Cranky is excited to cover is the 1935 tune Black Coffee. Not to be confused with the drippy song of that title covered by Sarah Vaughn, et. al. No, this is a straight up swinging melody.  The following version is sung with flapper-styled vocals by, Billie Hibberd and arranged by Ray Nichols. Cranky’s been having a blast with it in the off season and there is hope that it’ll be a rambunctious little number when he plays it out on the streets.

Here’s another version of Black Coffee by British group, Nat Gonella and His Georgians, with a nice short sax solo half way in.

And our favorite one-armed trumpeter Wingy Manone covered it too.

As for the “other delights” you’ll have to wait and see what Cranky feel like. He’s a moody guy when it comes to picking the songs for any particular outing.

Cranky has his eye on the thermometer and is eagerly waiting for temps to get up over 60. Once it warms up, and stops raining, expect to see your favorite Spring blooming’ saxophonist once again taking to the streets of Portland, Maine.

Most likely to find Cranky: